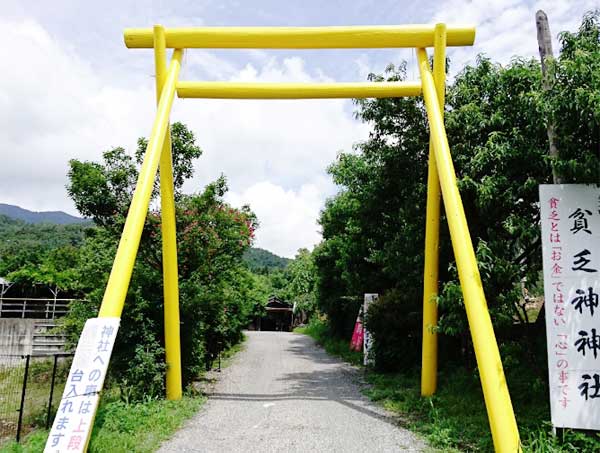 Kick out the luck to be poor and raise the fortune

What kind of person is suitable for?

Have a weak heart in oneself, weak mental, bad money cycle, always troubled with money

It is a very unique shrine where the statue of the poor God's wood is enshrined. "If the poor God is tired, the money will be gone!?You might think, but it's not.

Luck out the weak heart in oneself and raise the

This temple is not just "Ogan the Buddha." The enshrined "Poor God" is hit with a stick, and throwing beans etc. becomes "visit". It is the purpose of the "weak heart, stress, and negative feelings" in my mind to be the "poor God" in front of me, and to raise my own luck by driving it away. It is said that a lot of people of settle old scores who come to a good report such as "the high-ticket winning lottery" will visit the financial luck rises by giving the luck by oneself. It is a peculiar thing "The luck is opened by my will" rather than "Gods and Buddha".

Unfortunately, it was closed in 2018.It is not possible to visit now.

I went to the shrine of poverty, but I did not do it.I arrived at about 2 o'clock, but it is forbidden to enter (^ ◇ ^ ^;) It is supposed to be a time zone, and it is not used when I call from home page without a sign of people.Maybe it's not business anymore.Soba ate the same as Gori ☆ pic.twitter.com/K9QS6v0YSx

-The place where the poor God shrine is now is vacant.At the entrance, "The poor God Shrine was closed for Kavaren health.There is a sign that "please understand.The home page is still there, but the phone number written there is not already in use.When I asked the person who knew Sakurai-san, I found out that "Sakurai-San entered the facility with dementia." -From East Sports web

It is not the level that the shrine cannot be bought, and the amulet cannot be purchased, but the shrines themselves are gone.I'm sorry.

There is a poor God shrine in the miso shop in Chino City in Nagano Prefecture, Marui Ito Shoten!
Hoot the Sacred tree with a small stick three times, after three kicking, you pay the misfortune by throwing the main beans!Because the sacred tree is quite hard, let's be careful about the kicks force!
"Poverty is not money, but a heart problem," Pic.twitter.com/EneqEnJDYF.

You cannot visit the shrine now.

The way of the visit is too intense 😨 💨 three times Shibai with the bamboo stick, and putting the kick three times, 😱 💦 #貧乏神追放神社 #貧乏神 #貧乏神神社

PREV
Anime lover is Must-see｜Saitama Washinomiya Shrine is known as "Otaku jinja"
NEXT
If you tie the "Jizo" with a rope, the wish will come true｜Nanzouin shrine