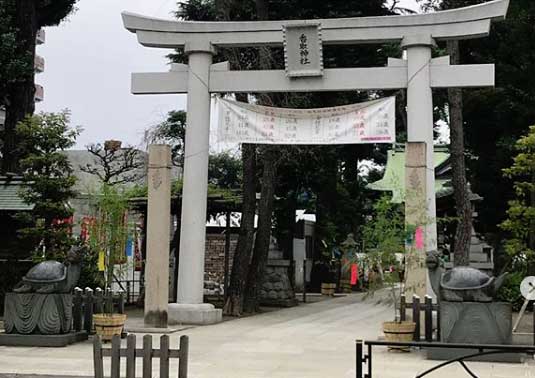 The actress who sees on the television, and the tapering foot like the model.It is the part which longs if it is a woman. Because it is the one born with, it is still early that it is unavoidable.The shrine "Katori Shrine" in Tokyo is said to be the "beauty leg". If you want to be a good style woman, it might be worthwhile to visit once.

Why the beauty leg?

Originally, it began to pray for the health of the foot by the person who went on a trip, and to have given prayer in this shrine. It came to be said that there was a profit of "good for legs" and "become a beautiful leg" there. It is a shrine to be said that a real actress and a model are praying incognito now.

Besides being able to become a beautiful leg, it is called as a shrine with various interests.

By the way, it is a shrine that has appeared in the "Police Kameari Park in Katsushika-ku" here that has been nicknamed [Turtle]. In collaboration with Mr. Yoichi Takahashi, a local native of this shrine, "Captain Tsubasa Ema" is also released.

I went to eat out in Kameari today, so I was at the Katori Shrine in Raj!
There is a charm of the beauty leg (o ^ ^ o) #ラジ活 b

Downtown Walk ④-1
Katsushika-ku Kameari Kameari Kat
ori Shrine under the Torii 🐢 a rare "Koma turtle" is big and admired, and aim at that star again!It is said that the Dosojin compa
ny which is in the temple of both images of [turtle] is known as the god of the beauty leg. Pic.twitter.com/3kTjnADjEz

I prayed and bought a amulet and wrote a EMA.
Both Chan!!!!!!
🙏 Please Pic.twitter.com/DUSPb1O5GO

Visited Katori shrine in the turtle.Our company is the shrine that the South Ge SC of the Captain Wing visited in the victory prayer.A lot of wishes.I hope it will come true 😊 is still a turtle, 💕 Pic.twitter.com/wi1ZabLMuw

After asking the god of a healthy beauty leg, I have also had a good amulet ♪ lung 💕 #美脚お守り #道祖神社 #香取神社 #境内社

2018.07.02 Kameari Katori Shrine Pilgrimage for the first time. On the way back, we had a break at the giappone of the shrine grounds. A lot of delicious cakes that seem to be lost! It was a pretty cupcake. #亀有香取神社 #神社 #寺社巡り #御朱印

Turtle-Katori Shrine ⛩, Katsushika-ku, Tokyo 3-42-24 Kameari Station 3-minute walk * stamp firstfruits fee 500 yen.Two types of stamp. In the shrine grounds, there is a café of Patisserie La Rose Giappone. A rare, Komainu koma turtle in the whole country. The Matsri of the Lord of the Lord is enshrined with the Oogami-Oogami (Wolf, etc.) is a legs health benefit as the Guide God, the left and right of the company is Waraji.It is a god deeply involved in the legs, it seems that many people pray for beauty legs. Tubu hammered Oogami is worshipped as a Bujinkan (God of the Struggle), and the god of the match-luck misfortune that "conquers everything" now. Festival Nerve Tsu main Oogami (wheat Wolf) Tubu hammered Oogami (Nishibori Wolf) The triad of Oogami-kun (Wolf). #亀有香取神社 #御朱印おばさん #御朱印夫婦 #神社仏閣めぐり #神社仏閣好き, such as profit Kijima Naito] fulfillment, business prosperity, game luck improvement, good luck misfortune sports promotion, home safety, transportation, safe legs health of travel, and benefits of the legs #近場巡り

June 24, 2018 (Sun) Good morning 😊 yesterday 6/23 I went to the Katori shrine in Katsushika-ku, Tokyo for the first time to visit the ⛩ of ⛩. It was a short walk from 😊 Kameari Station, and we had three people. It has gotten the stamp book and stamp that Mr. 🐢 is written here.I wanted to go 😅 I would like to increase would become want to look even if you try not to buy I was so happy to go 😍 my niece and I had a good day #東京都 #葛飾区 #亀有 #亀有香取神社 # Turtle Ario #姪っ子 #初めて #御朱印帳 #御朱印 #亀 #楽しい休日でした #今日も良い1日を #いいねありがとうございます