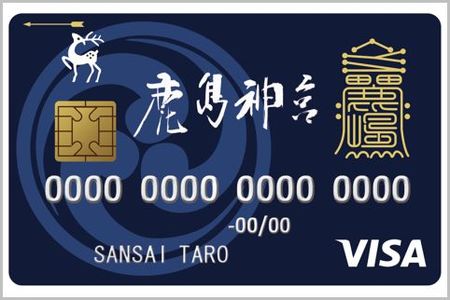 (* Image: news site from "Neta") Speaking of credit cards, of course, JCB and other card companies make. But did you know that the credit card company was able to "collaborate with the shrine", and there is a Kreca? Why is the shrine a credit card?You might think. Let's take a look at the kreca of the shrine together!

What is Kashima Jingu card?

Kreca be a talisman instead!

-The Kashima Shrine Card is unique, that the credit card itself is a talisman role.You can get a card exorcism by Shinto priest.The card design is astringent and elegant, and it has the atmosphere which seems to be profitable. -News site "Neta" than

Kreca's not just about to pay. It is the one that the exorcism (Oharai) is neatly made as "amulet" very. I do not know how to decorate a good amulet, I bought many kinds of where I do not. "I can walk always Hadami" as an amulet, endures in your wallet smart.

Kreca point to offerings to the shrine

-Kashima Jingu Card's point reduction rate is 0.5%, and the accumulated points will be donated to Kashima Jingu Shrine at the end of the month, 000p.In that case, there is a consideration that the serving dish (not for sale) which humbly made by using the cedar tree of the precincts arrives. -News site "Neta" than

You can accumulate points by using Kreca, but this card is used as a donation to a shrine. While shopping, I like the interdependence spirit that supports the local shrine.By the way, it seems that the shrine is not for sale as a return product.

There are also invitations to the precincts of the Shinto priest, free admission to the Treasure Hall, coldest season misogi, Setsubun Festival, and Kashima City fireworks display. -News site "Neta" than

It's a unique way to receive "shrine benefits" like shopping perks at the mall.

* * 🍉 Watermelon Pilgrimage and Tokoku, pilgrimage, 2017.7.9 🍉. * At Kashima Jingu Shrine, we issued a credit card and were soliciting it. A lot of people were interested. * It has the following characteristics. ① Card is exorcism ② annual fee 5,000 yen each time ③ renewed, the point that the admission ticket of the ④ Treasure Pavilion which can get return is accumulated by the payment of a free ⑤ card, and the ⑥ Shinto priest who is donated as the financial resources of the Shikinen Grand Festival, the inheritance of the cultural heritage, will guide * I am more than cash, Credit card 💳, so attractive and engagement 😳 Point is donated to the shrine, it is nice to have a strong connection 😆 ✨ * When the Toshogu shrine is issued, I will never join. I'm worried about the spread to other shrines. * ⚠ ️ There are pros and cons, but it is a personal opinion ⚠ ️ * #鹿島神宮カード #鹿島神宮 #クレジットカード #神社 #神社仏閣 #神社巡り #御朱印巡り #寄付, #お祓い済 #返礼品

Kashima Jingu Card received. Kashima Shrine, which is troubled by the budget for festivals, issued a credit card and donated points to the shrine to donate to the 😳. It is good that I made it amused, but when I do not use it for shopping, the point does not stick indefinitely 😅. #鹿島神宮 #鹿島神宮カード #鹿島神社VISAカード #VISAカード #ゴールドは年会費10000円 #青いカードは年会費5000円 #意味が見出せないから青をチョイス #寄付 #予算不足, #祭事 #instagram # Insta

There may be pros and cons to issuing a credit card to the temple, but I think it's OK to evaluate the shrine as a new initiative.

What kind of shrine is Kashima Shrine?

This shrine is famous as a power spot in Ibaraki prefecture.Every year, 600,000 visitors come to the new year. It is said that it is the oldest shrine in the Kanto area, and there is a god who defends the whole region. It is also famous for the enshrined of "God of Victory" and "God who suppresses catfish by earthquake". This is a spot where you can expect a wide range of profits such as charm and luck.

The voice of the person who visited

The clear surface of the water is like a mirror.#鹿島神宮 #御手洗池

Do you see from the front or from the side? #茨城 # Kashima Jingu # Mitarai Pond # carp # green # water # photo

-Details of the card, to the official site of the application Micard > >