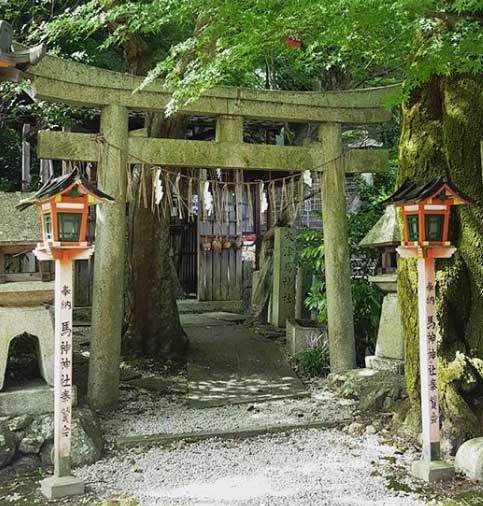 If you want to win the horse race, share good luck shrine

It is a shrine of the beginning that the infectious disease of the cow and the horse has been popular before long, and the prayer is lost. It is now one of the famous shrines as the "guardian God" of cows and horses. There are a lot of visits such as the person who uses cows and horses in the work relation, the enthusiast of horse riding, and the horse racing person.

The shrine is one of the long

The Shinto shrine is not independent, and the Big Yuan is a small shrine in the shrine.

-What is the Precinct (Daisha)?--a company that is enshrined separately from the headquarters in the shrine grounds.The main building is managed by the head office, and many are SHACAC and parishioners.

It is necessary to be careful not to hesitate because there is a Shinto shrine in the site of the long shrine.

Miidera, Otsu City, Shiga Prefecture, the head of the shrine, stamp.I also received the stamp of the Shrine of the Temple of the Horse gods.#御朱印 # Long Shrine Pic.twitter.com/Twl22N1zrX

e #馬神神社 of Otsu which went before this.

The whereas (horse cow) is a god of health and safety, but such a place is a good laugh thanks to t

he business?Betting's been a good tone lately.
I wish I could continue to

focus on the center once in a while.

I was going to ⛩ shrine, which I thought I hadn't done yet.I remembered it at the Shrine of the horse God.When I had not visited any historical sites before, I came to the front of G1... 🐎 along with Miidera. Pic.twitter.com/SXdaeEWjnx

#馬神神社.I want to make a profit.Continue listening to the radio.#秋 # G1 season would be a long time to buy a horse #